Advertising in L'Équipe: all you need to know

The independent family group Amaury is a French press, media and event organizer group whose activities have refocused on sports exclusively since 2015. Their media and press division includes L’Equipe and its advertising agency Amaury Média.

These media subsidiaries, which are able to transmit worldwide sports information on a daily basis, are supported by journalistic values ​​such as a rewarding context, positive news and certified performances. Indeed, the group claims a positioning and audience mechanism around sport, commitment and passion:

"- The sport that generates passion

- The passion that creates commitment

- A commitment that brings communities together ”. 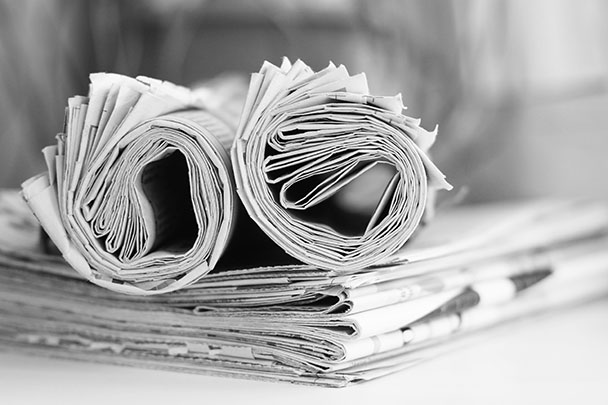 L’Équipe is the leading national daily newspaper in France specializing in sports news.

Created in 1946, L'Équipe has always managed to find its place in the French journalistic landscape of sports information thanks to its renowned journalists but also thanks to major  French and European competitions. These recurrent sports meetings are:

Every day of the week, all sports find their reader in this popular newspaper. This very powerful medium is number 1 of the National Daily Press with 2.5 million monthly readers. In 70 years, the newspaper has transformed, invested to diversify and created the television channel L’Équipe TV in 1998. It became a global media brand with a press, television and digital presence.

L’Équipe handles mainly with sports in competition but also decodes the environment: organization, limits, excesses, health, as well as the place of politics and sports institutions. With around 90 sports represented, L’Équipe takes a stand and makes powerful headlines thanks to the large photographs.

Over the years, L’Équipe has expressed feelings to the sports community. The editorial staff paid tribute to the world football champions, to world records, to the disappearance of personalities but also to the significant events that have affected France in the past recent years. 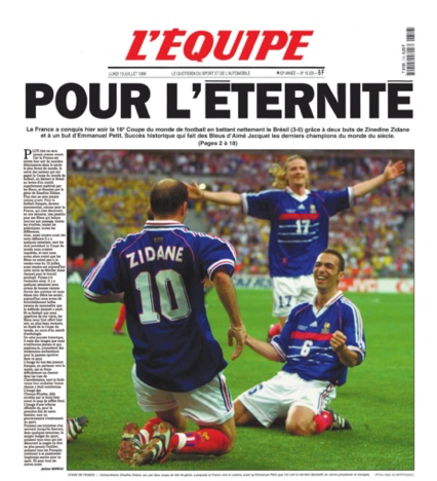 On the awakening of July 13, 1998, French people came to witness the greatest achievement of French football at the international level: "For eternity" headlines the newspaper accompanied by a photo of the heroes of the previous day. The French men's football team is world champion for the first time in its history.

Everyone remembers the crowds on the Champs-Elysées in Paris and the fervor that this brought to the hearts of the French. 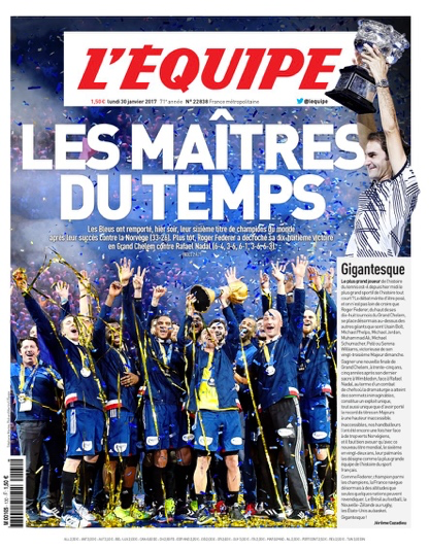 Two sports, two records for this front page of January 30, 2017. On the one hand, French handball players won their 6th world star, and on the other, the Swiss Roger Federer won his 18th Grand Slam title in the tennis Australian Open.

Both for longevity, for titanic matches, for the most indelible memories, for the high level displayed all these years and for the beauty of team and individual sports.

The magazine is the 1st daily newspaper in France for men. With an average age of 43, L’Équipe is the title with the youngest readership in the National Daily Press.

It is also the most exclusive with 20% of readers read L’Équipe only. It is also the number 1 title for executives and business leaders.

Always evolving, L'Équipe has adapted itself to the new habits and requirements of the readership: transformed into a tabloid format in 2015, it has enabled to grow by 6.4% in 5 years and thus with digital distribution on the rise (multiplied by 10 over the same period).

L’Équipe has a total audience of over 18,000,000 readers, more than half of whom stick to the print version.

Both website and application are real assets since the digital version of the newspaper is available to subscribers. There are no less than 12,597,000 unique visitors to the global internet audience (which includes computer, mobile and tablet).

The title's social networks and their performance (seen in November 2020)

With their strong presence on social networks, L’Équipe attracts new readers and influences generations to establish a powerful brand it has become over the years. Results, emotional images and an always active and present community, this is what L’Equipe stands for on social media.

Quotation requests for advertising in the L’Équipe newspaper can be made on the Adintime platform free of charge with a response within 24 hours.