The whole world is now affected by the coronavirus crisis. Messages and videos of support are emerging all over the world, calls for donations are growing, and "stay at home" awareness campaigns are visible in all media.

This radical change in life brings with it a change in consumption. Consumption of all kinds: food, technology, services... But also, media consumption!

So how has the "stay at home" changed the media consumption of the French?

Among the major changes in consumption, according to a study by Contentsquare:

19.9% increase, for mass consumption, in its conversion rate on online purchases (household items and groceries being those that increase this rate the most). Although it is not so easy for this sector to adapt to this new consumption model.

For pharmacies it is the same thing! This is a 10.3% increase in visits to sites in this sector. There was an increase of 27.3% in the number of transactions, resulting in a 15.4% increase in the average conversion rate.

Finally, the ready-to-wear also stands out. For this sector, both sales and conversion rate increased by 7.3%, and internet users spent 13.9% more time on these sites than usual!

A performance calls to mind, since the study, revealed that a 35.1% increase was recorded among lingerie specialists.

According to Kantar this is an increase of nearly 70% for web browsing in all.

Many studies are currently focusing on people's media consumption, and it is simply unheard of!

For example, the ACPM has published comparative 2019/2020 digital radio listening results showing an 18% increase over one year, which represents nearly 30 million additional sessions.

A study carried out by Agence 366 and Kantar revealed that 8% of French people had taken out a subscription to specific goods or services.

The same goes for TV that we thought had become obsolete. Indeed, Médiamétrie has communicated the statistics on monthly viewing time: that’s almost 45 minutes more monthly viewing compared to March 2019.

Still with a demarcation for the 50 and over category, which reaches an average viewing time of nearly 6h20 per day, that is to say 55 minutes more than in March 2019!

And yet the TV advertising market is nevertheless declining worldwide particularly in France (according to TVTY), with a 53% drop in brand presence on TV from February 1 to April 12, 2020. 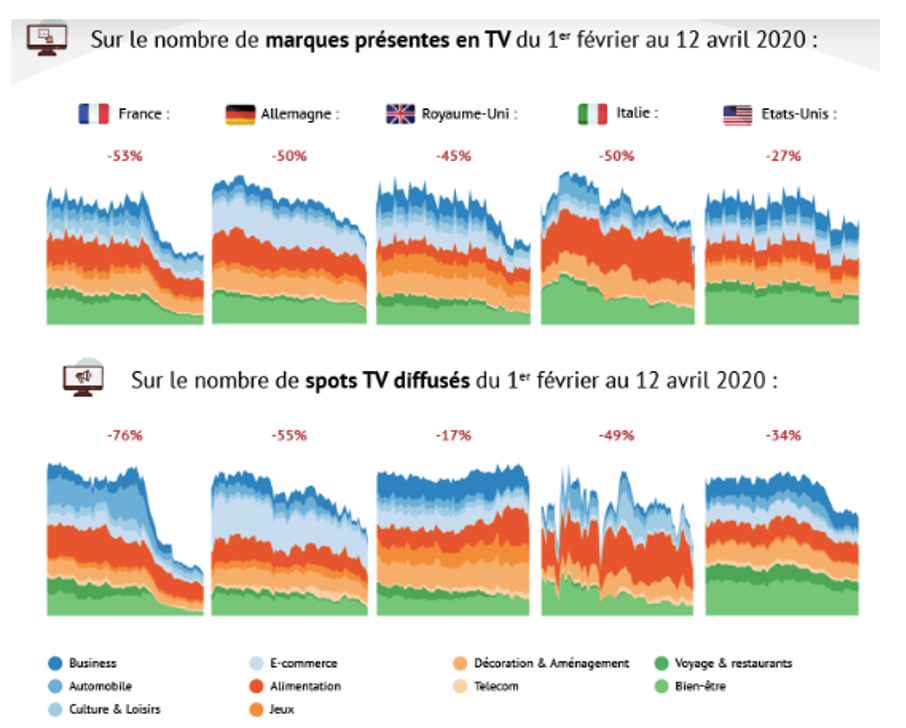 The Hadopi barometer, which studied Internet uses and cultural practices during the quarantine, showed that in 2020 46% of French Internet users declared having a paid subscription to video-on-demand during this period compared to 36% in 2019. This is a 10% increase over one year for the video streaming sector.

What about social media consumption?

The Kantar research firm has studied the issue, and not surprisingly, worldwide social media engagement is increasing by 61% compared to typical usage rates.

WhatsApp, Facebook and Instagram have all reportedly seen a 40% increase among those under 35. However, it is the WhatsApp communication platform that stands out from all the others.

In this period of global crisis caused by the coronavirus, several companies have decided to cancel their communication campaigns. This is the case for Air France, which decided to take up again its campaigns after the epidemic. Several luxury advertisers have the same point of view and say they want to reduce their budget on several media supports.

That's the key to communication!

Yes, today the mistake is to do nothing!

According to a study conducted by Kantar, a 6-month break in communication could lead to a 39% drop in awareness. And for good reason, the French expect a lot from brands ans in particular that they are active and helpful in this context of crisis.

Indeed 77% expect brands to "talk about their usefulness in the new daily life"; 75% want them to "inform about their efforts to cope with the situation".

French expect a lot from brands:

French people are interested and reassured by brands' actions 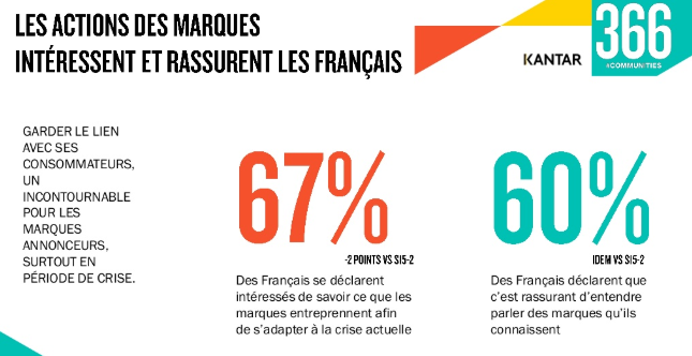 * keep the link with its consumers, a must for advertiser brands, especially in times of crisis

Some actions are more important than others in the eyes of French people. Indeed, the values of generosity, sharing and kindness are the most important.

We note that 35% believe that brands should make their production lines available to produce necessities that are currently lacking.

Or that 19% believe that brands should financially support research and health. Also 66% of French people think that the way brands talk about their solidarity initiatives in this period of epidemic is likely to enhance their image with consumers.

French want proof that they can count on you and trust you, now is the time to prove it. There are many simple actions for this:

What is needed is to readapt its communication, no longer to focus on its sales or profit but on its consumer and his well-being during this period.

Be transparent in its speech: communicate about its actions in support of the government or citizens.

Being aware of the decisions taken in the long term, look ahead. It is not a question of adapting over a short period of time, it is a question of positioning oneself as the advertiser supporting this period and therefore the trusted advertiser with whom the consumer wishes to have a link.

Favouring the local in all its perspectives: stakeholders, suppliers but also the media!

ACPM – Study on listening to digital radio in France - March 2020