Top 10 of the most creative advertisements in 2020 in France

We all agree that this is a rather special year coming to an end. Covid-19 is in everyone's mind and has had a big impact on the advertising market this year. But the creativity of the advertisers and agencies was not marred and we can even say that they surpassed themselves. Here is the top 10 of the most creative advertisements in 2020 in France.

Summary of the best advertisements of the year 2020 :

Outdoor billboard with The witcher

We start this top with an impressive DOOH (digital out of Home) digital outdoor advertising campaign for the film The Witcher. Netflix has put the means at its disposal since, to celebrate the release of this new series, it has brought out the huge legs of a rather scary monster! This impressive device was set up with Clear Channel's advertising agency.

A culinary podcast bathed in love at Picard

Giving a little love and bringing couples closer together is the mission that Picard gives itself every year for Valentine's Day. Mission once again fulfilled in 2020 since the king of frozen foods has produced the culinary podcast series "Love Begins in the Kitchen". Each podcast explains how to make a tasty Valentine's Day dinner from starter to dessert with 4 hands. An excellent recipe to promote their products while bringing couples together for this day of love.

With its "As Manic as You" campaign, Starwax and the Buzzman agency have signed a national advertising campaign full of humour with catchphrases featuring Starwax brand products. For example, signs were found thanking you to take off your shoes before looking at the advertisement to highlight flooring products or a disinfectant that "only kills 99.9% of bacteria".

The national campaign was visible on two different billboard formats: 2m2 billboards throughout France and 4x3 formats in Paris. 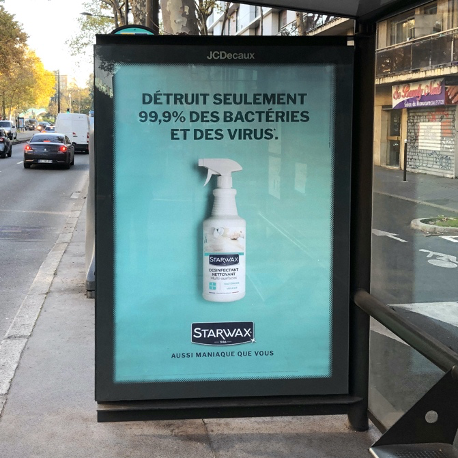 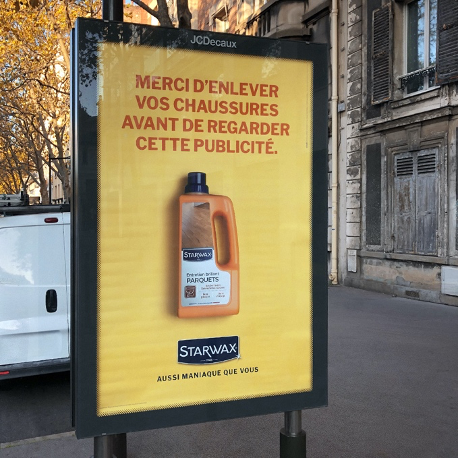 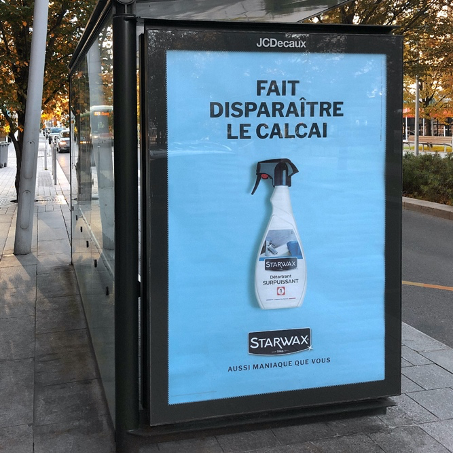 Amnesty International is well known for its hard-hitting campaigns and messages. This year, it signed a campaign to denounce police violence in France. The campaign features scenes of police violence ironically disguised with illustrations that make the scene look childish and innocent. For example, a kick to a demonstrator turns into a shoe-fitting session.

The visuals of this campaign were used in the press and social networks. On Instagram, Amnesty International encouraged its subscribers to create their own visuals using the campaign codes. 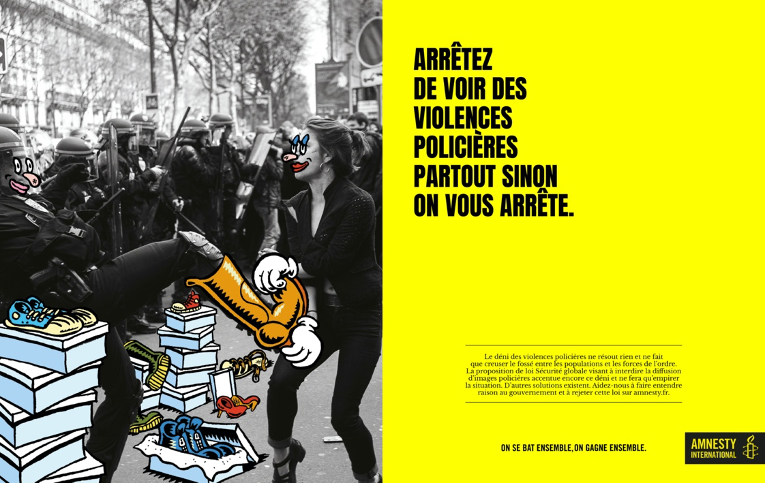 >>> Find out more about the prices of a press insert

At the beginning of summer 2020, OUIGO had tarpaulins installed in the back of trucks traveling on the A6, the aim was to target holidaymakers stuck in traffic jams on the road between Paris and Lyon, whereas this same journey can be done in 2 hours for less than 16 hours with OUIGO. 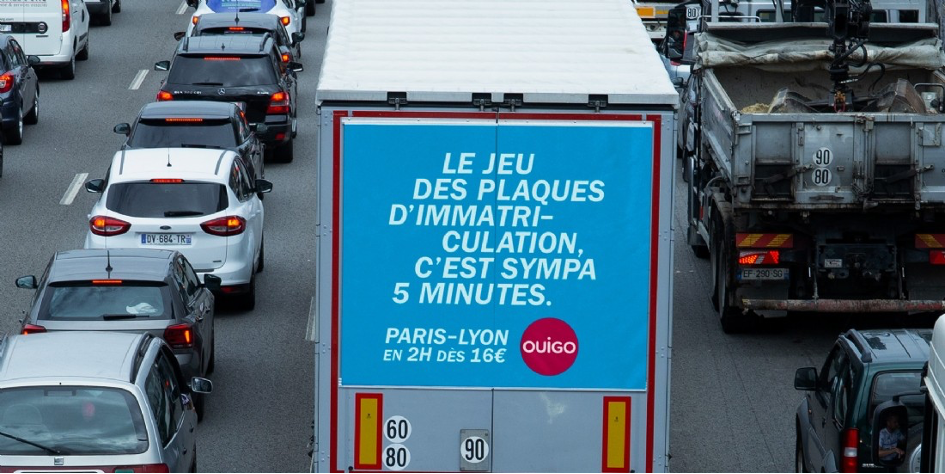 A huge publicity stunt which then gave rise to a commercial spot broadcast digitally.

Hollywood Chewing Gum is a breath of fresh air.

You couldn't make a top of the best 2020 advertising campaigns without mentioning Covid-19. Hollywood Chewing gum came back in September to make us laugh with a quirky campaign to help people who can't stand wearing masks. The brand offers you the ideal solution to make your nose and mouth cohabit in harmony under a mask.

This advertising campaign was broadcast on TV, DOOH (outdoor billboard) and on social networks with the #MaskedChew. 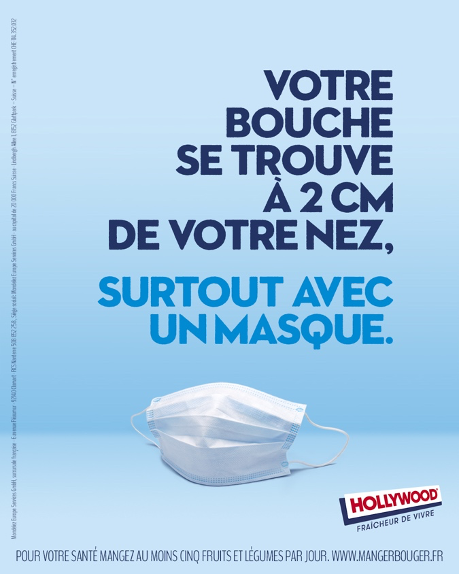 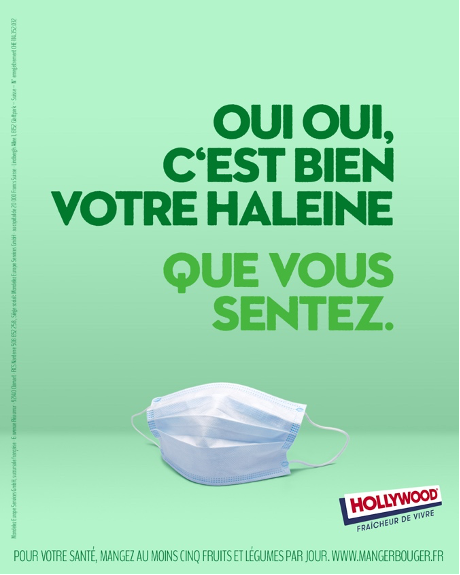 This year Jennyfer, known as "Renaissance", has launched a campaign to dust off its image and move it from a "has-been" brand to a more positive one. The campaign targets young girls aged 10-24 and breaks stereotypes with strong messages and the ##ZEROETIQUETTE. The tone is set! A successful gamble for the brand deployed on billboards and relayed digitally, the brand obtained 73% awareness among its target group and increased its market share (17%). Then in December 2020, the brand's success was recognised when it was awarded the Effie France 2020 Grand Prix.

How mon-marché.fr encourages Parisians to stay in the capital

Leaving her husband who does not want to leave Paris

Growing your own vegetable garden

Realise that vegetables are good but tenderness is better.

Mon-marché.fr and Buzzman signed a funny and offbeat poster advertising campaign to prove to Parisians that it is possible to have good fresh produce in just a few clicks. A campaign that skilfully plays on the frustrations and disillusions of Parisians who want to go into exile in the countryside.

The poster campaign took place at the end of August 2020 in the 5th, 6th and 7th arrondissements as well as on the Ile de la cité and Saint-Louis. The billboards were also visible in the Sèvres-Babylone metro station. The campaign was then rolled out on digital media. 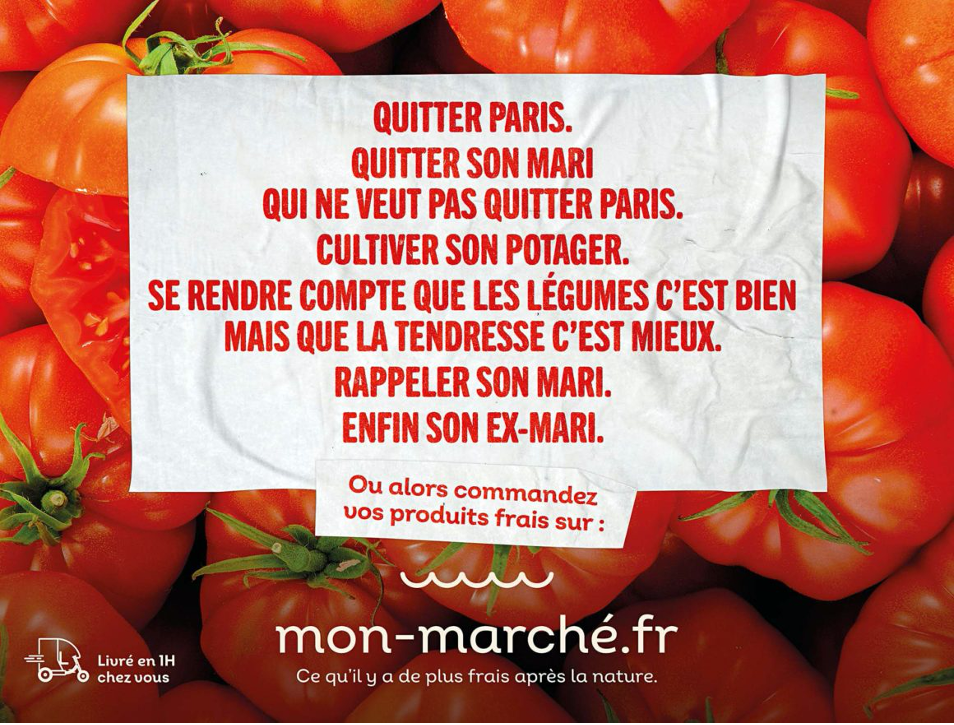 Ready for a real ball film

The advertising spot for testicular cancer was created by 2 associations: Movember Foundation & Cerhom. Cleverly produced, the video encourages men to keep an eye on "their equipment" to fight against testicular cancer, which is one of the most widespread cancers in France and still very little known. Bruno Solo, Stomy Bugsy, Thomas Soliveres and Frédéric Bouraly gathered in a bowling alley show a lot of self-mockery to encourage men to get tested. So do you too " Guys, watch your balls, it would be too much of a dick to pass for acorns ".

You'll get misty-eyed: When Intermarché thanks the medical world

We end this top 10 of the best 2020 advertising campaigns on a moving note with this magnificent spot from Intermarché to thank the medical world. The brand stood out this year with this spot "Until my last breath" which supports the nursing staff during this special year. The video features a nurse taking care of a patient as well as the mother and her son waiting for their father's recovery. A moving short film, which did not leave us indifferent!

Top 5 Back to School commercials of 2022

GDPR and advertising: How to adapt?

Media and non-media communication: what are the differences?