Back in France since 2013, the iconic burger brand Burger King always stands out with its offbeat, original and fun advertising campaigns. What do you think, the king of advertising or not? We'll let you make up your own mind with a top 10 (and a few bonuses) of the brand's best ads in France.

When Burger King advises you to go to Mcdo, KFC, Quick... 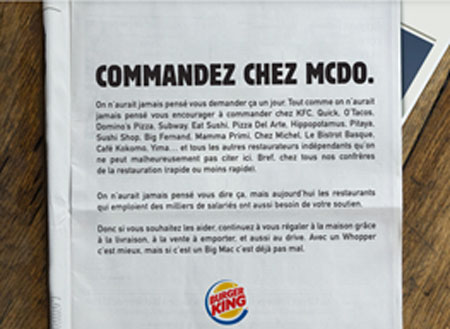 During the Covid-19 health crisis, the brand decided to speak out to invite the French to continue going to KFC, McDonald's, O'Tacos or other independent restaurants, which are all direct competitors of Burger King. Why? To support the thousands of employees of all these restaurant chains. Burger King has not forgotten the independents and has also thought about the restaurant owners and the smallest structures. It is a statement that remains true to the values, tone and editorial line of the brand.

The advertising campaign was launched on 1 November 2020 with a full page in the Journal du Dimanche and relayed on social networks. The campaign created a buzz with more than 1,300 media covers and was awarded the Grand Prix Stratégies de la Publicité 2021.

>>> All about the effectiveness of press advertising.

The successful hijacking of billboards

A poster advertising campaign carried out in 2019. Burger King France is hijacking billboards in places where there is no restaurant nearby to inform passers-by that they can have their food delivered by Deliveroo. An original way to divert the traditional use of an advertising panel!

The campaign was carried out in November 2019 in major cities in France.

>>> Learn more about how to prepare your poster advertising campaign

A clever publicity stunt by Burger King to reach children and parents! Why? Because Wednesdays are THE favourite day for children (and parents). And even more so now with the Mercredeal which offers 1 King Junior menu and 1 adult menu for only 10€.

The campaign was launched on TV with 7 spots of 10 and 30 seconds in May 2021. A campaign on social networks reinforced the visibility of the Mercredeal offer.

Despite the sometimes annoying behaviour of some consumers, Burger King France and Belgium are happy to see their customers in their restaurants. They wanted to make this known through this new TV, social media and in-store campaign, visible since 5 June 2021.

An advertisement aimed at the undecideds who change their minds 300 times at the checkout, at the little rascals who come to take advantage of the wifi network without consuming anything or just a coffee, at the adorable giddy people who leave their trays on the tables when they leave...

>>> How to make a successful Drive to Web advertisement?

An innovation for the times 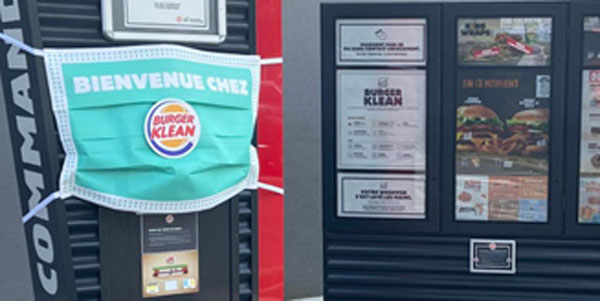 For the reopening of its restaurants around 10 May 2021, Burger King has come up with a new name "Burger Klean" which refers to the health situation that has been experienced for over a year. A new name that marks their commitment to social distancing and new hygiene measures.

Burger King restaurants attracted the curiosity of consumers by posting a photo of this innovation on social networks.

Burger King gets into basketball!

Playing a basketball simulation video game like NBA 2K21 to win free food at Burger King is great, right? There are several rewards to be had. Indeed, if the shot is well launched, with difficulty and distance, then the reward will be better. So it's best to score a basket from the middle of the court and get a full menu.

This is a very clever way of reaching out to the younger generation as they are the primary consumers of fast food.

Participants had until April 04, 2021 to download "The Menu Court" in MyLeague (PS4) or MyNBA (PS5) mode to have fun on this virtual basketball court in the colours of fast food and share their videos on Twitter, under the hashtag #BKMenuCourt 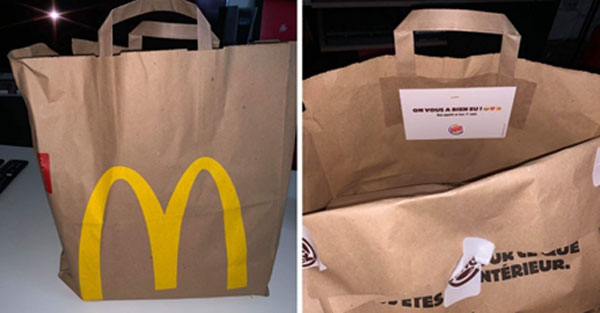 To have a bit of fun, the fast-food restaurant disguised itself for April Fools' Day. Customers who were supposed to receive their Burger King bags received McDonald's bags instead! Inside, there was a card signed by Burger King saying "We got you good". A very humorous way to get a little closer to their customers.

A publicity stunt that took place around 1 April 2021.

The celebrity Fred Testot is featured in a TV commercial. It is very clever of Burger King to invite an ambassador to represent the brand. A publicity stunt that makes an impression on viewers and they become attentive to the TV spot. 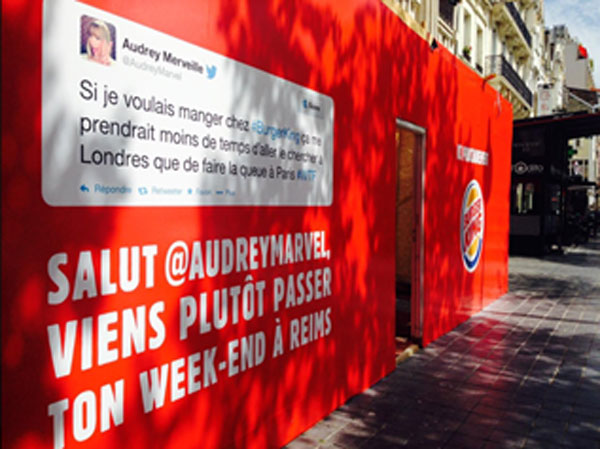 These tweet responses are always related to a new Burger King restaurant location, in the same location as the tweet.

A communication that has been regular throughout France for several years now.

A radio ad for Burger King

In 2019, Burger King is producing a radio advert. The 30-second spot is simple and punchy, with a humorous tone that attracts the attention of listeners.

Burger King is offering a new "Kingdom" loyalty programme that rewards loyal customers with points, or rather "crowns", to earn burgers.

How do I collect crowns? Customers simply create an account on the Burger King app. The more crowns they have, the more rewards they can win (and the rewards are delicious!). The brand had fun coming up with menu names around the "royal" theme with the "Royal Menus" obtained with 160 crowns.

The fast food giant's advertising campaign consists of 2 humorous films and features "king" customers. The spots were worth watching and were available on TV, FLIGHT and on social networks from 7 March 2022.

And we're super nice ... we show them to you just below:

A price reduction on drive-through orders

Burger King stores in France have decided to support the millions of motorists who are experiencing rising petrol prices. While the price of diesel and petrol is rising, the price of the Whopper is falling at the drive-through: €1.99 for the Fast Food's flagship sandwich. This price was available from Monday 21 to Sunday 27 March.

The announcement of the price of the Whopper being cheaper than a litre of diesel was visible in Le JDD, the regional press and on the brand's social networks.

An operation will also be launched by the chain in Belgium from Wednesday 23 to 30 March and will be visible on their Burger King social networks.

The Olympics and Burger King

In Belgium, Burger King wanted to reward their customers. The restaurant offered to give a burger to every consumer who captured the summer Olympic medallists chewing on their medals. The aim was to share their screenshot on social networks by mentioning Burger King and the hashtag #WishItWasWhopper.

An advertisement that catches fire

An augmented reality marketing operation that sets fire to the advertising posters of Burger King's competitors. Passers-by could view this ingenious advertisement through an application!

By downloading this application and once the advertisement was consumed, a surprise awaited consumers: a voucher for a free Whopper.

An advertisement that could be seen on Brazilian television in 2019.

Stephen King's film "IT" is collaborating with Burger King Germany in 2017. The film features a scary clown reminiscent of the mascot of its competitor McDonald's. The restaurant showed this advert at the pre-premiere of the film in Germany. It is the longest commercial ever made by Burger King.

To keep up with all the fast food news, here is the Burger King Twitter account: @BurgerKingFR.

How is advertising evolving?

Top 5 Back to School commercials of 2022

GDPR and advertising: How to adapt?