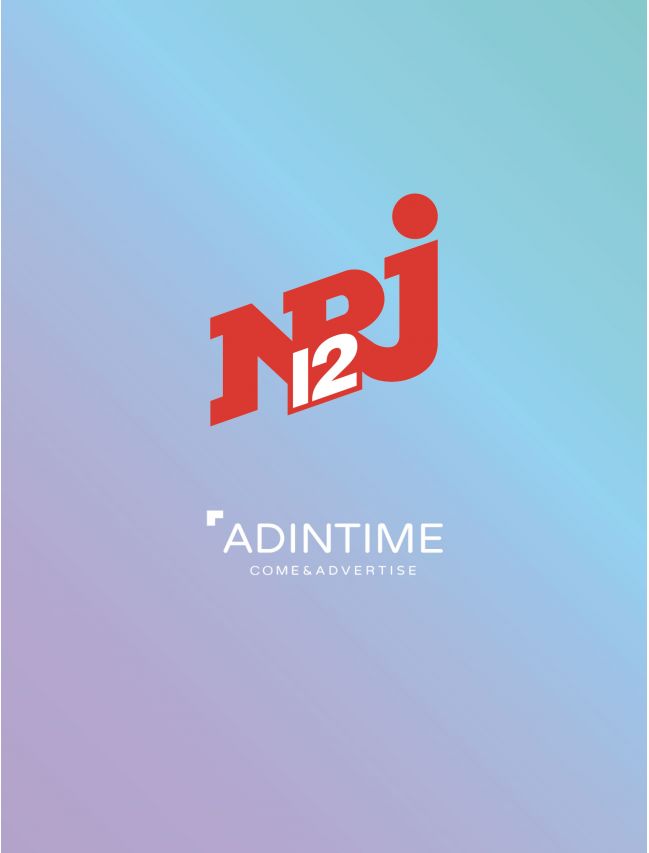 Ask for a quotation

NRJ12 is a French private TV channel. It is a generalist channel created on March 31, 2005, that is broadcast throughout France on DTT, cable, satellite and ADSL.

The channel belongs to the NRJ group, a multimedia empire whose TV and radio entities are dedicated to entertainment. Advertising on NRJ12 through entertainment TV programs is ideal for triggering the purchase decision. The group has more than 43 million French viewers every month and is extremely successful with people aged 15 and more.

The TV channel in a few figures:

You want to advertise on NRJ12?

Request a quote to obtain the formats and rates for advertising space on the TV channel NRJ12.

Advertise on TV with the best rates on NRJ12 TV Advertising

Our dedicated team of media experts will take care of your quote request as soon as we receive it. We will negotiate on your behalf directly to the TV channel you requested with best advertising rates. Within 24 hours, you will receive your quotation at the best negotiated rate possible. Feel free to reach us if you need any help or if you need additional media advice.

NRJ "Hit music only" is a concentrate of optimism that brings together all generations with more than 4.7M (1) listeners every day. It is the favourite radio station for the under 65s (2) with a morning show from 6 to 10 a.m. hosted by Manu, which attracts more than 2.9 million listeners every day (1). The show continues in the afternoon with C'Cauet from...
View

Chérie FM "The most beautiful music", with more than 1.7M listeners(1) every day. It is the most feminine radio station with an audience composed of 67% women. (2) Boost your business with a radio advertising campaign on Chérie FM by emerging as close as possible to your local issues thanks to the 112 active frequencies spread throughout the country....
View

Nostalgie "Les plus grandes chansons" is the 2nd largest music radio station in France (2) with 2.9M listeners every day(1). Boost your business with a radio advertising campaign on Nostalgie by emerging as close as possible to your local issues thanks to the 71 active frequencies spread throughout the country. See the list of available cities in the...
View

Rire & Chansons " Les stars du rire " with more than 1.1M listeners every day (1) . It is the most masculine of the music radio stations with an audience composed of 71% men(2). Boost your business with an emerging radio advertising campaign that is as close as possible to your issues throughout the Ile de France region. The NRJ GLOBAL radio advertising...
View
Tap to zoom

The channel is represented by the advertising agency NRJ Global. The group has powerful media leaders in entertainment in France and has a great influence in digital with over 15 million subscribers on social networks.

NRJ12 is the first TV channel of the group and captivates more than 2 million viewers every year with the events broadcast on the channel.

The most popular TV programs on NRJ12

Among the most watched programs on the channel, here are some:

Why advertise on the TV channel NRJ12?

Every day the channel gathers 5.8 million viewers. Not to mention the NRJ Play video hub, which records nearly 10 million views per month.

NRJ12 targets a young audience, mostly millennials, aged 15 and over, and women responsible for purchasing decisions under 50.

The advertising offers are innovative and the NRJ12 advertising rate is customizable according to the budget and objectives:

On the objectives of drive to web, the TV channel NRJ12 is more than effective. Indeed, for 1 GRP purchased, the channel generates up to 3.5 times more visits than a historical channel!

NRJ Play, the replay platform of the channel NRJ 12, has more than 10 million videos viewed every month. Hundreds of videos are available in live, replay and VOD. The site has been awarded the Digital Ad Trust label for responsible digital advertising and uses the Mediarithmics DMP to target the audience in a specific way, which guarantees the effectiveness of an advertising campaign.